3D Rendering - a brief history of its evolution

3D models surround us, and sometimes they are so realistic that we cannot even realise they are just a piece of rendered art. Movies, architecture, engineering, video games, medicine - you name it! Unless you have been living under a rock in the past few decades, you have probably asked yourself questions about the world of 3D. One of them is "What is 3D Rendering?" and you might have also been wondering since when it has been around?

In this post, we are going to give you all the answers to these questions and much more. Stay with us to the end to discover the exciting history of the evolution of 3D Rendering. Are you ready? Then let's go 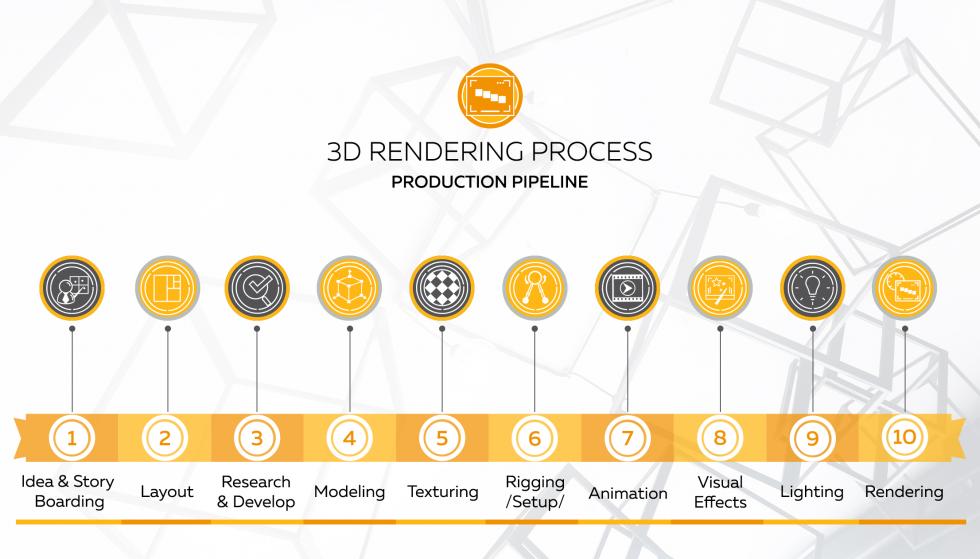 3D rendering is a creative process in which modellers and renderers produce an image based on a 3D model stored in a computer. It is very similar to photography and cinematography, and this is not a plain coincidence! When you are taking pictures with your camera, you know what you are photographing. The scene is in front of you. Same goes for making a movie.

But the 3D scenes that you will be rendering are imaginary. This means that everything you want to appear in 3D rendering is created in advance in the computer. When you have this done, you can start rendering the 3D computer graphics. The 3D visualisation that is going to be created is based on the idea that is portrayed. That, on the other hand, will determine a few critical things - specific colours, textures and materials for particular objects in the images.

The whole process can be summarised in a few steps:

It may sound simple, but you need to take into consideration that the more detailed the 3D computer modelling needs to be, the more effort it receives from the designer and more computing power and processing time is required. That is why you need 3D experts with professional equipment to take care of all of these things for you.

More information on the topic can be found in our blog.

When and how 3D Rendering was born?

3D computer graphics can be traced back to 1960 when the graphic designer William Fetter explored the perspective fundamentals of creating computer animation for a human body. Thus he became the pioneer of creating such figure as a 3D model!

What was that first figure? Well, it was a pilot in a Boeing cockpit. The idea was to simulate the needed space for that cockpit. The model became known as the Boeing Man and later as Boeman. Fetter is also responsible for the coining of the term Computer Graphics (CG).

Next, in 1963, a miracle happened. The first 3D modelling program Sketchpad was created. The author Ivan Sutherland took care of this during his time at MIT. For his creation, he became known as the Computer Graphics Father.

The newly born baby needed to learn to crawl. This happened in 1975 with the creation of the "Utah Teapot" by the researcher Martin Newell. What is so special about it? If you are familiar with computer programming, you may have heard that there is a default program that each beginner creates for each programming language. It is called "Hello world", and its idea is to display the same text on the computer screen. In the realms of 3D modelling, the "Utah Teapot" is so iconic that it can be safe to say that it is the "Hello world" equivalent and thus it became the standard test render.

There are several techniques that artists can use:

Speaking of the suitable tools and software, here we need to define three categories:

Your computer is the primary tool that you will need. The more powerful, the better! You will also need a well-calibrated monitor and other suitable peripherals.

Some of the popular programs that allow you to create high-quality 3D renders are 3Ds Max, Maya, Cinema 4D and Blender. They can be aided with various plugins. Currently, some of the best ones are Vray, RailClone, Ornatrix, thinking Particles and Arnold. There are also free and paid 3d rendering software and plugins, and even some of them can run under various operating systems.

And what about suitable 3D Rendering engines?

There are 7 of them that are worth mentioning. The leaders in this category are:

How did 3D rendering affect the industries?

The creation of 3D rendering quickly changed the work processes in various industries. Let's take engineering and architecture, for example. Prototypes and presentations are more detailed with the aid of computer-generated images. Not to forget to mention that 3D modelling is efficient in terms of costs and time-saving.

Another good example is the movie industry. 3D computer graphics allow studios to create movies with perfect quality by providing high-definition effects and images to the general physical effects of the film. The 3D animation movies cannot be created unless using 3D rendering.

Want another application? Video games! The gaming industry is flourishing. The consumer's demand for constant graphic improvements and realism is satisfied with the evolution of the rendering techniques, engines, software and tools.

What about the future?

First, we have to say that in the present, there are some critical applications for 3D Rendering. Here we are speaking about VR - virtual reality, MR - mixed reality and AR - augmented reality. The difference between them is that AR uses the live view and adds digital components to it, while VR is an entirely computer-generated world that shuts out the physical one. In VR, everything is digital. MR, on the other hand, combines elements from both VR and AR.

Now, since we have cleared this out, let's talk about the future of these technologies and their connection with 3D rendering. It is not a secret that the gaming industry will continue to upgrade and rely more and more on them. It is expected that around 59% of the current and potential projects utilising AR, VR and MR will be relevant to the gaming space.

However, two more industries are expected to benefit from these technologies. Here we are speaking of education and training.

Another expectation for 3D rendering is to be widely used for the creation of holograms. Holography is using light diffraction to make an image. The projection can be used for various applications - exhibitions, service booths, etc.

One thing is certain - 3D rendering is and will be important for our everyday life in one way or another!

In this post, we have learned how it evolved from the earliest computer graphics to the most advanced VR games ever made. You also found out what tools and computer software are needed for modellers and renderers so that they can create high-quality 3D visualisations. We are sure that this evolution will not stop and more industries will soon benefit from 3D rendering. What do you think? Would your business benefit by integrating 3D computer graphics for your processes and marketing purposes? If you have questions, want to know more about this topic or need assistance for your next project, contact us or leave a comment.

Home » Blog » 3D Rendering - a brief history of its evolution